Indonesia is the best performing market in Asia and among the world’s best-performing emerging markets this year. Elevated commodity prices and optimism about the economic outlook are driving gains in Southeast Asia’s biggest equity market, which has powered Indonesia’s  benchmark index ( the JCI index) way to a gain of 7.0 % (0.3% in USD-term) to 7,040 as at end of September 2022. This happened when most of the world’s stock markets are languishing due mainly to the Federal Reserve’s tightening cycle and global slower economic growth as shown by the 29.3% decline in MSCI Asia ex Japan Index.

Indonesia equity market is becoming a shelter for global investors that escape a worsening outlook for global equities, expecting sustained strength in the commodity-heavy country. Supply disruptions caused by the Ukraine conflict and subsequent Western sanctions have sent commodity prices soaring, with Brent crude , coal, palm oil, copper and nickel hitting multi-year highs. We have observed USD5.2 bn net inflows so far this year from foreign investor, nearly doubling the USD2.7 bn inflows seen in the full-year 2021.  On the macro side, as commodity exporters, an increase in commodity prices will help Indonesia to see improvement fiscal balance and surplus in current account balances through better terms of trade. 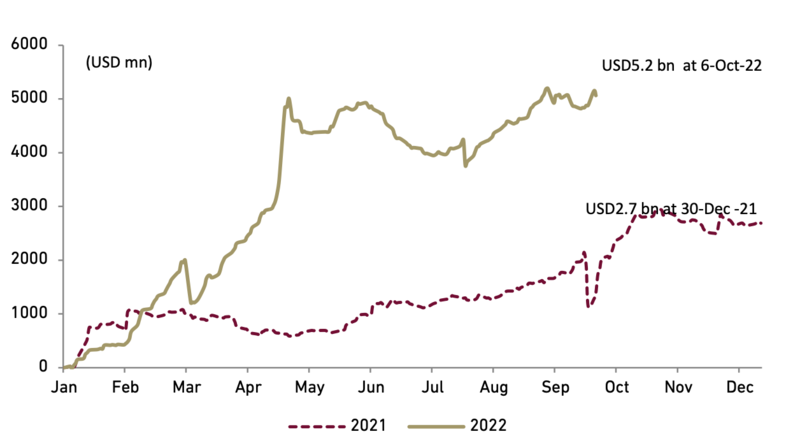 We believe market sentiment continue to see improvement this year, which can be observed through the trading value in the equity market. Data from the stock exchange showed that Average Daily Trading Value (ADTV) on the local stock market had risen by 17.5% from Rp13.3 tn in 2021 to Rp15.7 tn in 9M22. We believe that trading activity will continue to be strong this year as we expect the JCI to give 11.6% return (based on our YE target of 7,350) which is slightly higher than 2021’s return of 10.1%. This is despite more individuals return to the office where many turned to stock market trading while confined at home during the Covid-19 lockdowns. 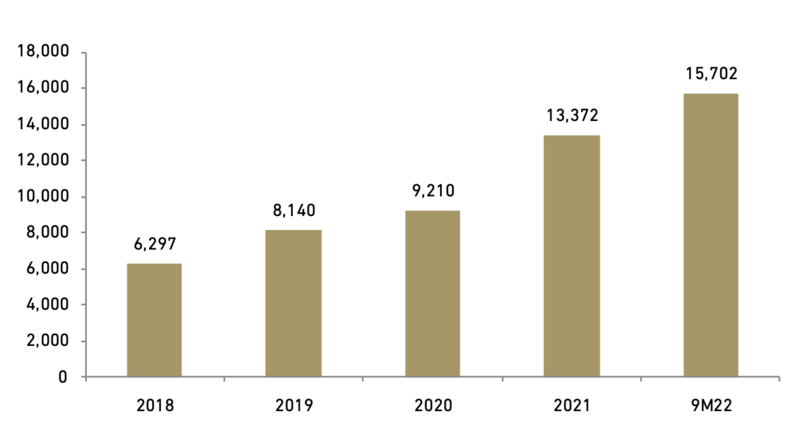 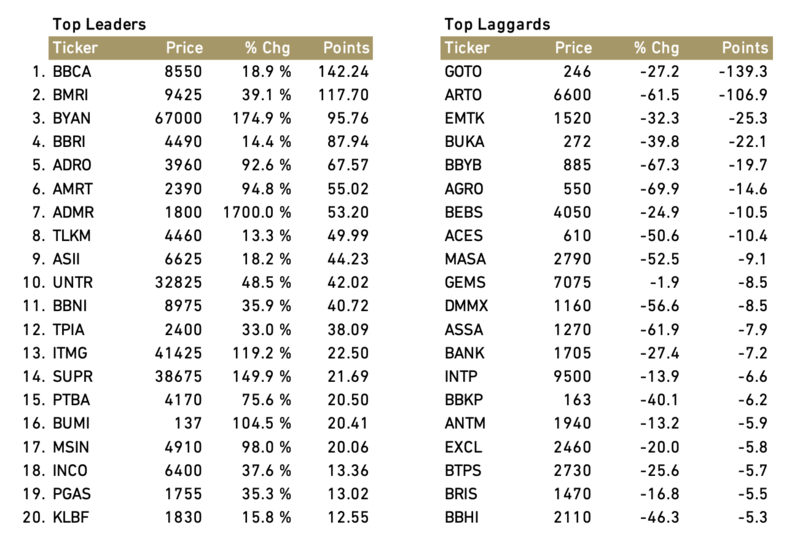 In October and November, the Indonesian stock market could continue to be pressured by global factor given the (i) hawkish tone by the US Fed, (ii) prolong tension between Ukraine-Russia and (iii) global recession fear. Hawkish tone by the Fed might cause the market to price in a possible scenario where the US economy may head for a hard landing. Perceived aggressive interest rate hike going forward has contributed to the strong rally in the Dollar Index towards a 20-year high, contributing to the depreciation of rupiah by 6.8% in year to 15,250/USD which still fared better than other Southeast Asia’s currencies decline such as MYR of 10.4%, TBH of 11.5%, PHP of 13.5%.

Meanwhile, poor macro-economic conditions and political situations in Europe could weigh on the euro and drive the US dollar strength. Based on 10-year historical Indonesia equity market trend, October historically closes higher to represent a moderate recovery from September but November closes slightly lower. We expect the market to remain sideways to slightly positive in October-November with among key catalysts are 3Q22 earnings results and trade data. Meanwhile, the JCI has notched an average positive return of 3.2% in December. Therefore, we maintain our year end-2022 the JCI of 7,350 (4.4% expected return from September).

Overall, for the full year of 2023, we see declining earnings growth momentum due to the high-base effect in 2022 coming from the banking and coal sectors as well as Astra group earnings. We are forecasting a 7.1% rise in corporate earnings for 2023F, driven by the banking , telco and consumer staples  sectors, compared to i) 44.9% growth posted in 2022 supported by coal sector’s earnings growth of 159%  and ii) 62.9% growth recoded in 2021 from the low base in 2020 due to pandemic. Based on our latest earnings revisions, we project that the aggregate net profit of the corporates under our coverage to amount to Rp377.5 tn in 2022F (+44.9% YoY), and rising to Rp404.3 tn (+7.1% YoY) in 2023F. Note that banking and coal sectors would still be key component of corporates under our coverage, close to 60% of the earnings come from these sectors in 2023, therefore these two core sectors alone should drive a fair bit of the earnings coming through. 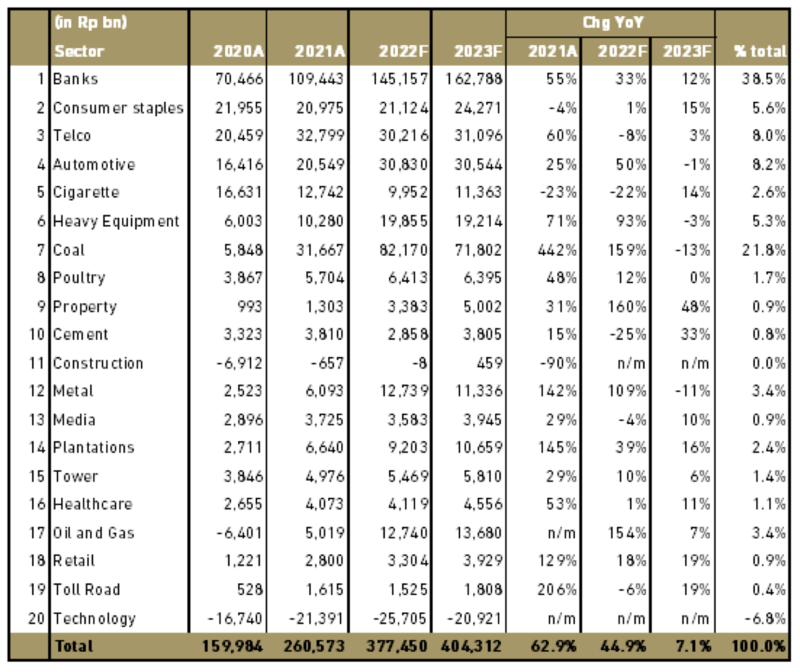 We expect Indonesian stock market is showing resilience and scaling new highs amid encouraging corporate earnings, domestic macroeconomics revival, and Indonesia is also expected to benefit from a multi-year highs commodity prices although moderating below the peak level in 2022.  With a relatively stable and strong GDP of 5.0% and solid corporate earnings growth forecasts, we project foreign fund inflows to continue in 2023F.

As for 2023,  we are more selective in terms of stocks, with a focus of selecting mix of sectors that have solid fundamentals, are reasonably valued and defensive. Our preferred sectors for 2023 are banks, telco, consumers, EV metals, coal and oil & gas.