The consumer staples sector has been under pressure in 2022 owing to a surge in global commodity prices. Stepping into 2023F, the staples sector continues to face notable headwinds from the unprecedented inflationary with Bank Indonesia (BI) predicted domestic inflation would print around 6% in FY22F following the fuel price adjustments and slow down to 3.3% in FY23F. In a high inflation environment, unevenly rising prices inevitably reduce purchasing power and affect consumer spending patterns. This is in line with Nielsen recent survey that future consumer spending intentions continue to be reshuffled amid soaring inflation as consumers tend to select lowest price, monitor cost of overall basket, and lean on promotions. However, the silver lining is that consumers would prioritize daily necessities and companies have more flexibility in passing cost increase to customers by raising selling prices, we believe that should benefit consumer staples sector in FY23F.

Consumer Confidence Index (CCI) remained in the optimistic territory (>100) during 1H22, mainly supported by the resumption of economic activity. With an expectation of more challenging times ahead, the CCI is projected to weaken until on heightened inflation and it is projected to rebound to initial levels given the assumption that inflation could reach more moderate levels in 2H23.  Moreover, consumer also prefer to put its discretionary income in banks rather than spend it amid inflationary period. According to the data Indonesia Deposit Insurance (LPS), nominal deposits of commercial banks have increased by 7.7% YoY as of Aug-22, relatively lower than growth in 2021 and 2022 on the back of eased restriction and revenge spending activities, though the number may grow higher due to potential higher interest rate, resulting slower economic activity. 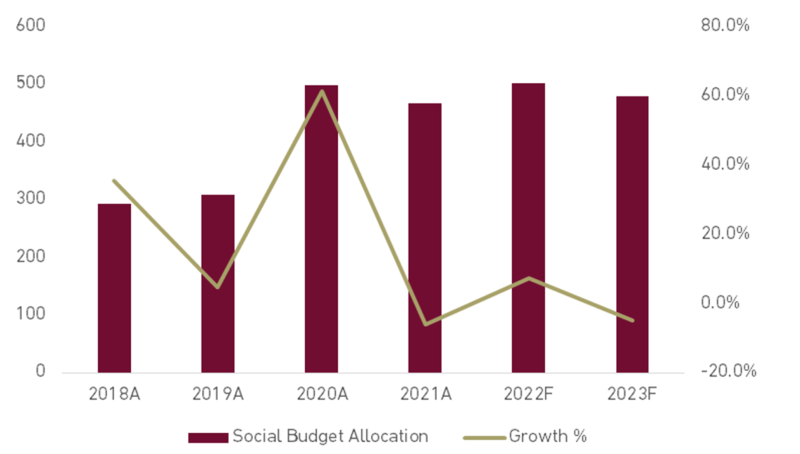 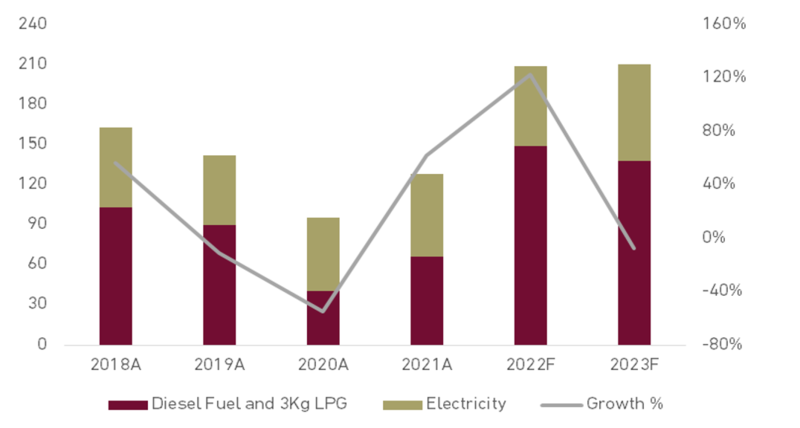 Consumer staples companies performance is inextricably linked to global commodity prices, with regard to raw materials. With an elevated price level of raw materials in 1H22 from CPO, oil, wheat, skimmed milk due to the war between Russia and Ukraine, it put gross margin of consumer staples stood at lower levels.  On the positive side, we are witnessing commodity price have been falling since 3Q22, and this softening trend is expected to continue in FY23F. We list out the outlook of each key raw materials as follows:

Looking back into 1H22, we think most of consumers companies have a better positioning to pass on the cost increases in this year as the price adjustment taken by consumer under our coverage around 8%-15% and more underway in 2H22. With that being said, the improvement in staples gross margin is expected to be reflected in 4Q22 and onwards, after taking into account some inventory lag and price adjustment. 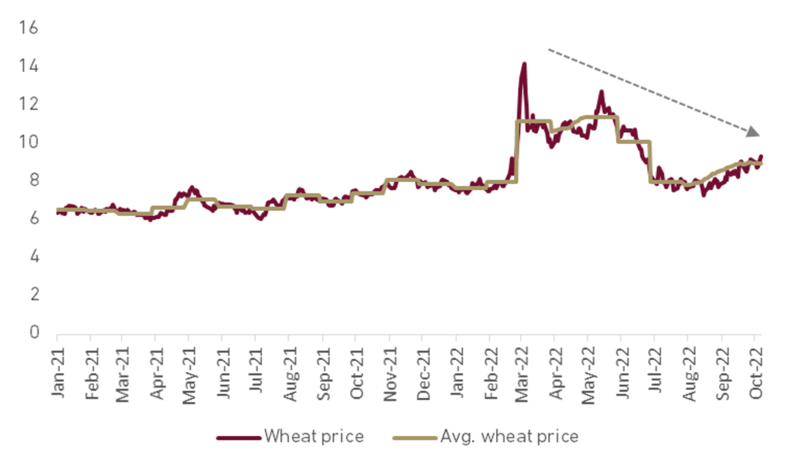 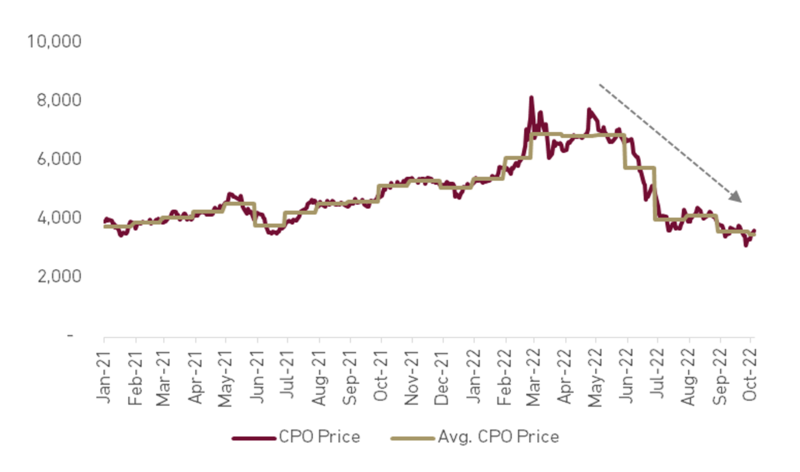 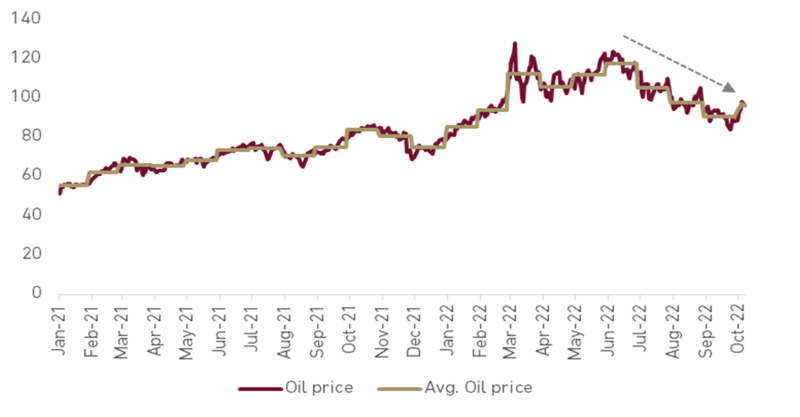 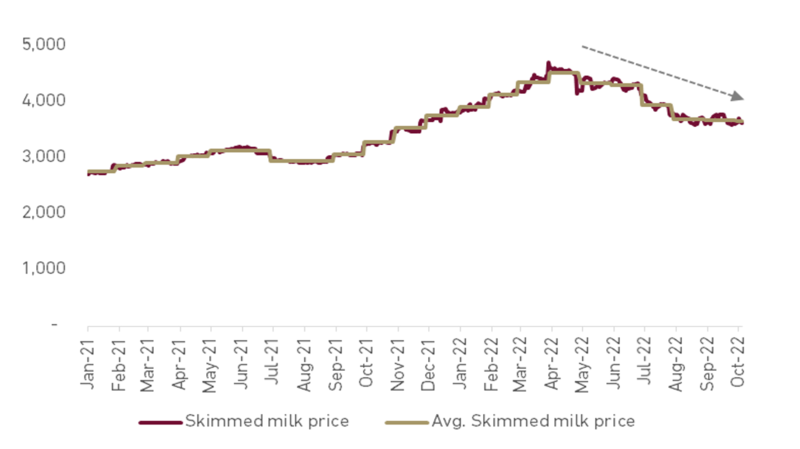 ​The government decided to raise subsidized fuel prices by 30% amid rising global oil prices and a depreciating rupiah, which has lately become main concern for consumer and consumer staples companies. Given this backdrop, we expect staples companies to experience higher domestic freight costs in 2H22 and ahead in response to a 15% tariff increase for loading and unloading services from Sept-22 along with higher fuel prices. Looking back into 2013-2015 when the government also imposed higher subsidized prices of fuel, we try to highlight several keys: i) The aggregate revenue of our coverage has increased at a CAGR of 9.1% with a 10% net income CAGR ii) relatively higher freight cost which equivalent to around 3-4% of total sales (vs. freight cost/total sales ratio at 2-3% in 1H22), iii) Operating margin on blended basis still expanded for ICBP, INDF, and MYOR, except UNVR. Going forward, judging by the projected higher inflation figure in the next year, we see consumer staples earnings hold up as long as core raw material remains stable, while bigger companies made use of better economies of scale, enabling efficiency, and strong pricing power. As such, we are now looking at 9-10% sales growth and 1%/14% earnings growth for our coverage in FY22F/23F.

The plan of imposing an excise duty on packaged sweetened beverage was mentioned again in the 2023 state budget draft, though the implementation has been delayed for the past few years. Apart from being another source of government revenue, taxation on sweetened beverage is an effective intervention to reduce sugar consumption, thus preventing obesity and diabetes. Meanwhile, the revenue collections from the newly excise tax object is projected to reach around Rp1.5 tn p.a. based on Perpres 104/2021, or less than 5% of total excise tax in FY23F. We think excise on sweetened beverages may hurt the consumer staples companies under our coverage such as ICBP and MYOR as they need to increase its ASP by 5%-25% to compensate cost increase. In a view of the tight beverages competition, we think the company will pass on excise tax tariff either partially or gradually over period of time. 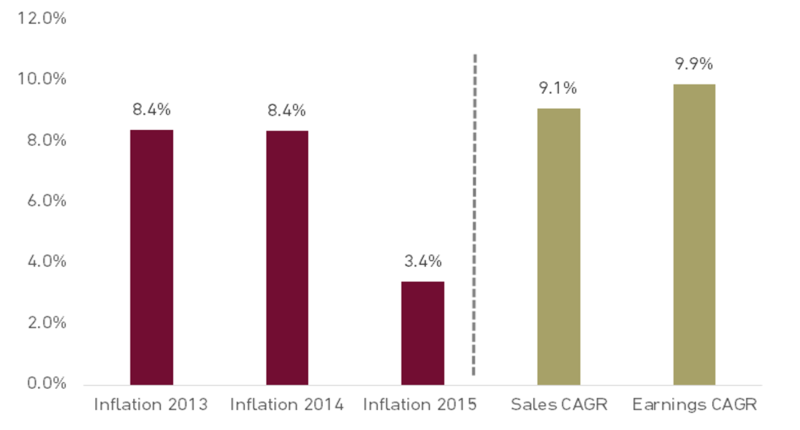 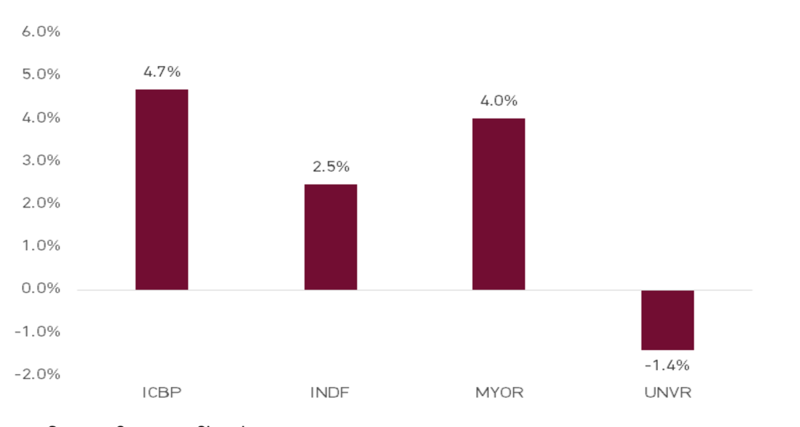 With current condition, we think things may reverse to favour more consumer staples led by optimism on better earnings visibility in 2H22 and 2023F.  However, we see some headwinds are still in place. First, lower social assistance budget in FY23F due to the end of National Economic Recovery (PEN) program and more allocations for infrastructures. Second, higher cost of living due to greater inflationary pressures. Third, rising domestic freight cost due to higher fuel price. Fourth, implementation taxes on sugary drinks. Nevertheless, most companies have taken price adjustment to counteract the higher cost, and we expect this effort is continue although with a milder hike in FY23F. Therefore, we think the winners in this challenging situation would be those with 1) strong pricing power to pass on cost inflation 2) Limited concentration to domestic market and having dominant export presence, 3) market share gains with less exposure from higher commodity price. We maintain our recommendation to be selective picking in staples. Our top picks in the sector are: